In July, a colleague in our maths department approached me and shared that he’d had an idea for an event. One that might support staff confidence when it came to speaking to students about extremism, radicalisation and challenging the myths perpetuated by the media. We loved the idea and so a team of us set out to have a panel discussion on the subject for the September development day. Within 24 hours we were almost full and with just 90 places, we knew we’d have to run similar events in the future.
What follows are some of the notes I took during Dr Shamim Miah’s (@shamim1) talk.

The talk was built around his recent book, ‘Muslims, schooling and security‘. Primarily chapter 6 of his book, which was centred on the way in which the whole agenda around security has changed and developed. He would focus on ‘radicalisation’ – So what is it? How does it work? Where does it come from?

The word has its origins in the Latin word, ‘radix‘. It means the ‘primary source’ or the origin of something. So radicalisation really refers to the moments before the bomb goes off rather than the violent acts themselves.

Prior to 2001, there was no reference to extremist radicalisation. After that, the political discourse and academic debate begins and the term comes into existence.

A French political scientist and professor says that the reason certain individuals get involved in terrorism is due to the realignment of identities. If there is a disconnect between what an individual perceives their identity to be and the social/political climate then there is an imbalance they find a way to address. Religion isn’t the primary driver.

He worked as a CIA Operative and spent a lot of time in Afghanistan. His thesis about radicalisation is that the cause is not the religion but the social network an individual interacts with.So what of the suggestion, often reinforced by the media, that there is a clear correlation between segregation and radicalisation?If you look at some of the most segregated communities, the Amish in America for instance, you’ll struggle to find any examples of extremism in their communities (where the segregation indices are high).

Working at the centre for ethnicity and diversity, explored the longitudinal census data for several locations- Bradford, Oldham, Birmingham and London and discovered there was more integration than self-segregation.

Read about this study here

In the early part of the 60s, integration meant assimilation.

There’s an issue of interpretation regarding integration and segregation.

When we drive through a city, there are often physical forms of segregation. The assumption is then often made that the individuals have self-selected to live in these areas. Perhaps we often neglect to consider the economic factors that may impose the area in which individuals end up living.

Equally, we can’t jump to conclusions about segregation when it comes to arrests either. It’s indicated that of the numbers of individuals arrested and sentenced under the counter-terrorism act, a significant number come from middle-class backgrounds and there’s no clear indication they come from segregated communities.

At the Chicago centre for he study of suicide bombing, he conducted a longitudinal study between 1983 and 2003 and discovered that religion wasn’t the key motivating factor and they generally took place in response to a military occupation.

‘He says that religious fervor is not a motive unto itself. Rather, it serves as a tool for recruitment and a potent means of getting people to overcome their fear of death and natural aversion to killing innocents.’

So what draws people to join foreign fights? 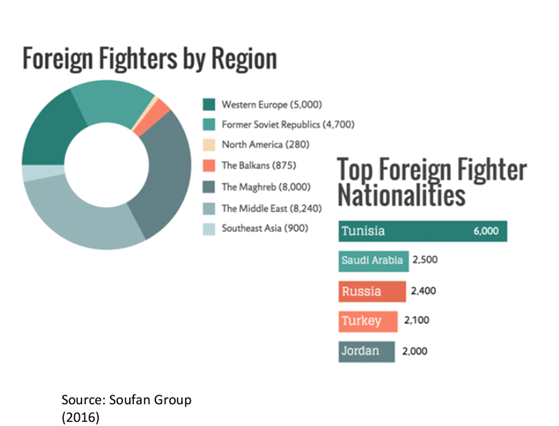 One particularly noticeable factor, is that if religion were to be a driver, why is it that Malaysia and Indonesia, with the largest populations of Muslims, are not on the list?

Within the list of top foreign fighter nationalities are countries with political instability themselves and this could be a contributing factor.

Within the Western Europe figures, the highest countries are France, Belgium and the UK.

Of the individuals who travel to fight, there is not a single universal trend that draws everyone’s experiences together. Each individual has a different journey.

One possible pattern is that many seem to be 2nd and 3rd generation migrants, not first.

“If you are a youngster in the French suburbs, your mates are second-generation Muslim immigrants and you want to wage war against society, the system, where do you go?” Olivier Roy

There are certainly some indications that the number of foreign fighters who have criminal backgrounds already is high.

‘In his survey of 31 incidents of jihadist terrorism in Europe between September 2001 and October 2006, Edwin Bakker found that at least 58 of the 242 perpetrators of these attacks—or 24 percent, a “strikingly high number,” he says—had a criminal record prior to their arrest for terrorism-related offenses. According to a study by Robin Simcox, of 58 individuals linked to 32 ISIS-related plots in the West between July 2014 and August 2015, 22 percent had a past criminal record or were in contact with law enforcement.’

Increasingly with foreign fighters, there’s the Islamisation of radicals rather than the radicalisation of Muslims.

It has been estimated that 6% of foreign fighters from EU countries are converts to Islam, many are second or third generation immigrants, very few have a prior connection with Syria, and almost one- fifth (18%) are women.

Most government policies focus on religion. Make sense of that and you understand the individuals. This is, most likely, leading us down an unhelpful path.

So what can be done to overcome some of the challenges extremism presents to us?

Education gives us a way forward.

We can challenge ideas.

Empowering our students to think critically is essential.

We must teach them to look at facts and not to internalise them but to question their origin and potential bias.

Education can provide knowledge but there should be a greater focus on what students do with this knowledge (hopefully consider it critically). We should be a more enlightened individual at the end of our education.

Too much of education is about the economics- What do you want to earn at the end of this? Where do you want to go? Education should be far more about self-actualisation than about how much money you have in your bank.

Self-actualisation certainly sits well with the diversity of the FE landscape and environment. Helping our students to differentiate between fact and fiction is our duty.

In fact, a study at the end of 2016 carried out by Stanford University indicates students’ ability to determine fact from fiction may be in a worrying state already-

‘The students displayed a “stunning and dismaying consistency” in their responses, the researchers wrote, getting duped again and again. They weren’t looking for high-level analysis of data but just a “reasonable bar” of, for instance, telling fake accounts from real ones, activist groups from neutral sources and ads from articles.

“Many assume that because young people are fluent in social media they are equally savvy about what they find there,” the researchers wrote. “Our work shows the opposite.”

“What we see is a rash of fake news going on that people pass on without thinking,” he said. “And we really can’t blame young people because we’ve never taught them to do otherwise.”

Read more about this study here

We’ll be looking more closely at how we develop students’ critical thinking skills at The Sheffield College and we’d love to know what resources you’re using to develop this in your students.

Unfortunately, Shaykh Sadaqat Hussain was ill and couldn’t make it to this event at the last minute but we hope to rearrange his visit.